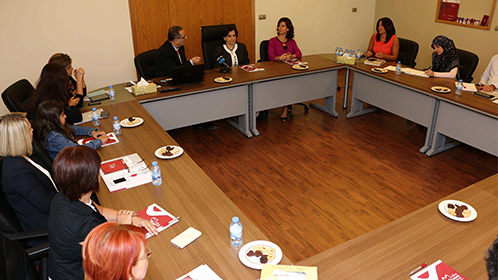 The session stressed on the preventive examinations for women at the age of 45 or more and discussed women’s cardiovascular health and the importance of reducing burden of the disease through awareness, prevention, screening, primary treatment and advocacy.

“WHHC was created to decrease the death rate from cardiovascular diseases, considered as the leading cause of mortality both in Lebanon and worldwide”, said Mrs. Sleiman while stressing the major difficulties and obstacles the center encountered. “Now that the Center’s work has gained momentum on the ground, it is important to assess the performance in light of the results achieved as measured against the initial objectives”.

Since the opening of the center last September, more than 600 screening were conducted from which 47% were diagnosed with calcification of the coronary arteries. This test classified 12% of screened woman at high risk which implicated strict prevention recommendation and further coronary artery disease workup.

“Modern technology, carefully designed protocols and engaged academic cardiologists from reputed universities are teaming together to enhance woman cardiovascular wellness” said Dr. Antoine Sarkis Professor of cardiology, Cardiologist ,Hotel Dieu de France Hospital  “The Lebanese woman is now at the center of medical attention and has become an active partner in the fight against heart disease and stoke”.

The Women Heart Health Center strives to improve the treatment of cardiovascular diseases in women and reduce the burden of the diseases through awareness and prevention programs, early diagnosis and initial treatment. WHHC’s goals could only be achieved through the collaboration with The American University of Beirut Faculty of Medicine & Medical Center (AUBMC/FM) and Saint Joseph University Faculty of Medicine (USJ/FM).

It is worth mentioning that the cardiovascular diseases are the number one cause of death among women in the world. In fact, 56% of deaths among women are due to cardiovascular diseases while 64% of them did not appear to have any symptoms. Preventive examinations are crucial for women above the age of 45 and can be done at the Women’s Heart Health Centre in collaboration with eminent cardiologists regardless of their social background as the center is run by Yaduna, a not-for-profit foundation