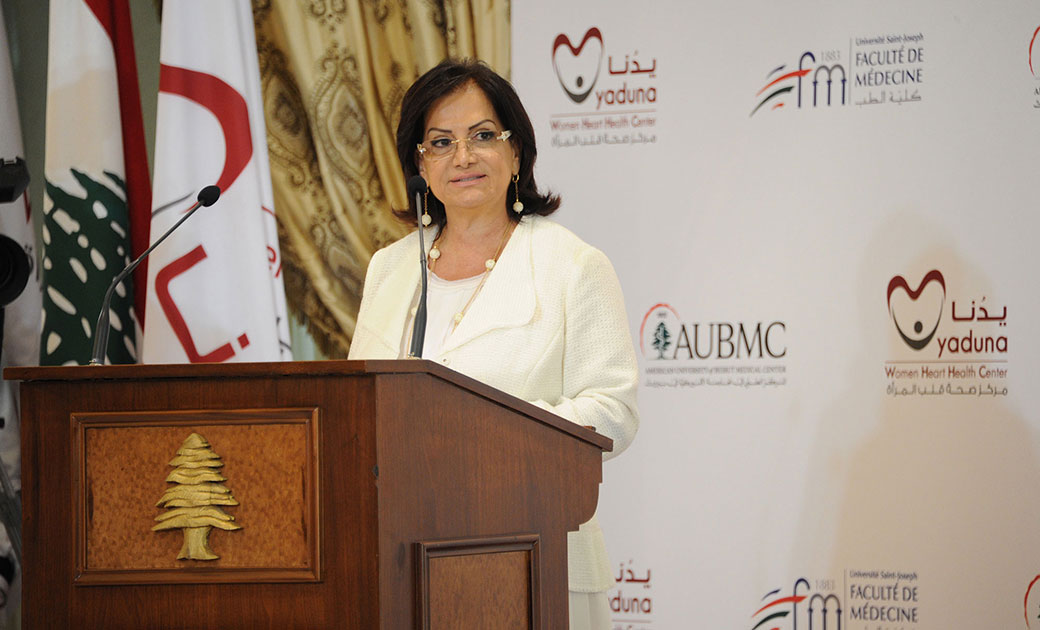 Beirut, Lebanon : The First Lady of Lebanon H.E. Mrs. Wafaa Sleiman officially opened the Women’s Heart Health Centre (WHHC) on June 20, 2013. The opening of the new center, located in Baabda, was made possible through the collaboration of The American University of Beirut Faculty of Medicine & Medical Center (AUBMC) and Saint Joseph University Faculty of Medicine (USJ/FM).

The center strives to become a model of excellence in preventive and primary treatment of cardiovascular diseases in women, regardless of their social background. By collaborating with academic teams from distinguished national universities, the center will implement the highest standards of clinical practice and research.

As part of her speech during the opening ceremony, H.E. Mrs. Wafaa Sleiman commented: “It is my duty, to serve the Lebanese people and the Arab residents in Lebanon. Since a large number of women are in need for help, I have decided to direct my attention towards them and accordingly I created Yaduna, a non-profit organization that aims at raising the quality of life of women. Moreover, as a result of a study that showed that 56% of females"related deaths are caused by diseases associated with the heart and the arteries, I prioritized this issue and initiated WHHC to become the first activity of Yaduna.”

Speeches were also given by Dr. Samir Alamand Dr. Antoine Sarkis. “The global burden of disease, the vulnerability of women for heart disease, and the importance of early diagnosis and intervention” were stressed by Dr Alam who also added that “the center is unique and is different from other existing services in the country”.

As for Dr. Sarkis, he emphasized the importance of heart disease prevention for women by stating: “There is a misconception about coronary heart disease which is commonly considered a disease mostly affecting men. Another misconception is to consider that cancer is the leading cause for mortality in women. In fact many studies prove that mortality from cardiovascular diseases in women is seven times more than mortality from breast cancer. Nowadays one woman over three will die from cardiovascular disease and at a younger age due to increased smoking in women, while in many countries men have reduced their cigarette consumption.”

As guests arrived to the center, they were given a tour of the facility and were familiarized with the medical equipment. Shortly after, invitees were escorted to the Presidential Palace for the opening ceremony, where a press conference took place, followed by a cocktail reception.